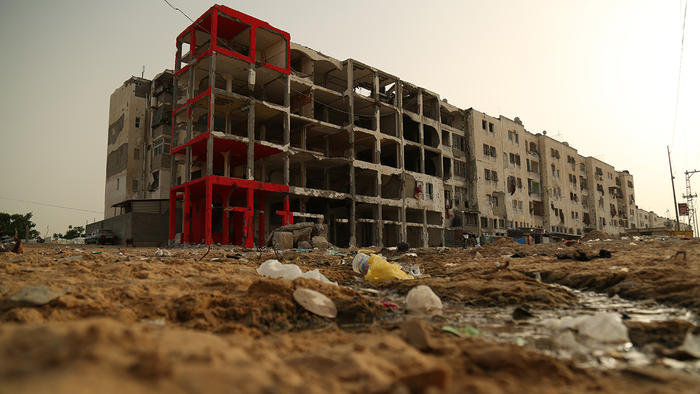 The Survivor’s Guide to Gaza

VIDEO HERE
Gaza will be unliveable by 2020 according to the UN, with daily life already a struggle to find food and shelter, but Dateline finds the people bringing innovation and inspiration to the fight for survival.

With my eyes closed, I can hear the crash of waves and feel the wet sand and warm sunshine so familiar from beaches at home in Australia.

But when I open my eyes, reality snaps sharply into focus: this is Gaza.

The sand is strewn with dense layers of rubbish, nearby buildings have bullet and rocket holes and the breakwall framing this harbourside sunset is a messy mass of rubble – repurposed remnants of three wars in six years.

The water may look inviting at…

I’ll soon be traveling Israel/Palestine this weekend with 40 other Jews from around the world as part of a solidarity delegation to Hebron and the South Hebron Hills sponsored by the Center for Jewish Nonviolence. CJNV is a relatively new organization that has been doing important work bringing Diaspora Jews to Israel/Palestine to stand in solidarity with Palestinians in nonviolent actions agains the occupation. Last year, CJNV traveled to Tent of Nations (a very special place about which I’ve written many times before) to plant trees to replace the 1,500 fruit bearing trees that had been destroyed by the IDF. More recently the CJNV participated in an action at the World Zionist Congress to protest the complete absence of the occupation from the World Zionist Organization’s agenda.

“” This online space is dedicated to the five youngsters: Mohammad Suleiman, Ammar Souf, Mohammed Kleib, Tamer Souf, and Ali Shamlawi, who are being held in Israeli prison charged with 20 counts of attempted murder each for alleged stone-throwing, with no evidence whatsoever.

The boys have been labelled as “terrorists” before any objective investigation even took place. They’ve been condemned in the Israeli media as guilty even before they “confessed”, under torture, to stone-throwing. They’ve been denied any sort of justice in the Israeli military court system that convicts Palestinian children at a 99.7% rate, not unlike that of the world’s worst totalitarian regimes of the 20th century.You, a conscientious human being, have the right to know about the crimes committed by the brutal, racist regime that is the Israeli military court system.The Hares Boys have the right to live their young lives without that regime cutting them short in a mock judicial process.If you are a journalist, a citizen journalist, a blogger, a mother, a father, or a youngster yourself, and you want to fight for justice for the Hares Boys, please share the information on this website within your social circles as wide as you can. And, even more importantly,  please have a look at our “What You Can Do” page, and take action.

If you want to get involved in the campaign, here’s our email: haresboys [at] gmail.com. Hares Boys facebook page is here: Free the Hares Boys.Thank you.

Our world can only become better for everyone if we all stand on the side of the RIGHT. “” 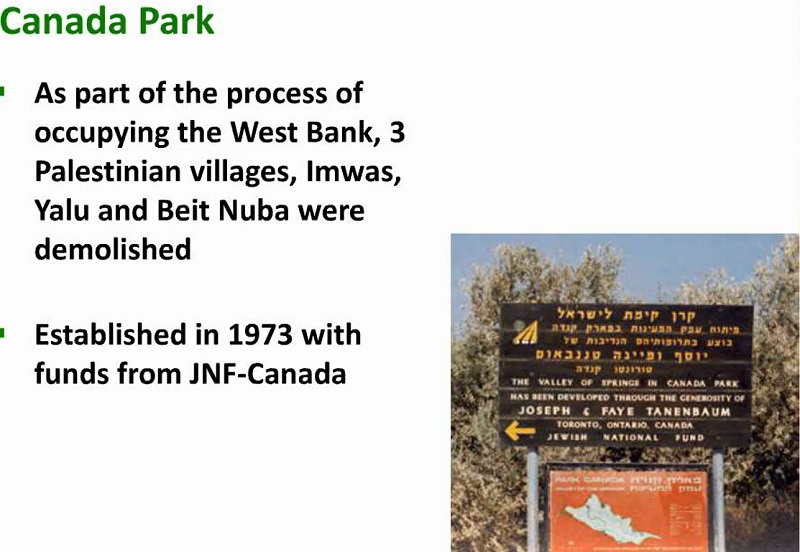 /* NOTE: 3 Villages ethnically cleansed on the direct orders of Moshe Dayan and that the JNF/KKL help hide under “Ayalon Canada Park”. Here is the photographic evidence of the Ethnic Cleansing of Imwas by the JNF/KKL: 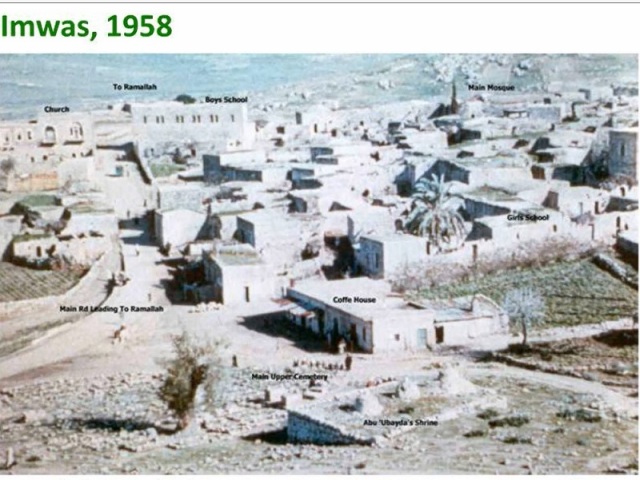 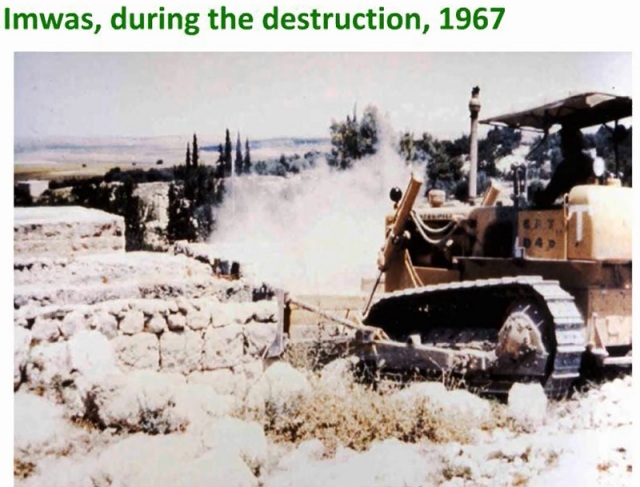 “On Saturday, June 7, 2003, 150 people gathered in the auditorium of Neve Shalom ~ Wahat al-Salaam to commemorate the 36th year of the occupation — the territories in the “Six Day War” as they are called by Israelis or “Naqsa ’67” as they are called by the Palestinians, and in particular to commemorate the tragic event that took place not far from here in the area of Latrun.

Three groups came together to organize the event: The Committee of the Three Villages, a Palestinian organization that works for the recognition of the injustice and for its repair through the return of the refugees to their villages and the return of their lands; Dumiya – Saqina, the pluralistic spiritual center of Neve Shalom, which works to advance the goals of the binational community by providing a framework for spiritual, cultural, and educational activities so as to advance listening, understanding, and reconciliation between Arabs and Jews; and Zochrot.

In this time, while a physical wall of separation is being built between the nations, we, Jews and Arabs, choose to act in favor of recognition of the memory of the Nakba of the Palestinian people and call for justice to be granted to the refugees and the internally displaced in favor of reconciliation and the advancement of peace and equality.

We chose to tell the story of the three Latrun villages and to post our signs because their stories are an example of Israel’s policy which chooses to deny and erase it. On the lands of the village “Park Canada” an entire park was created, full of signs, visited by thousands of vacationers, but the Palestinian history of the place is not mentioned. The signs tell the far-off history all the way back to the Romans.
…”

Continue reading and check out photos of the event at : Zochrot – Imwas, Yalu, and Beit Nuba Tour

” If I had composed this Atlas of the Israeli Settlements in the West Bank and East Jerusalem a few years ago, I would have insisted that this inventory of colonial urban typologies constituted an evidence of the Israeli violation of the Fourth Geneva Convention, I would have reminded the history of the invasion of the West Bank and East Jerusalem (as well as the Gaza Strip, the Sinai and the Golan Heights) in 1967 and the military rule that subjugated and continues to subjugate the Palestinian bodies since then, I would have referred to these colonized territories as “Palestinian land as recognized by the International Community,” etc. This is however not what I am going to do here, because I am convinced that this narrative and the imaginary it conveys is ultimately harmful to all Palestinians and, for the same reasons, to non-Zionist Israelis too. On the contrary (or, rather, in an apparent contradiction), I would like to undertake the rather perilous exercise of praising the Israeli settlements for the scenario of the post-apartheid future they accidentally allow.

To read the whole paper: Towards a Post-Apartheid Palestine: Atlas of the Israeli Settlements in the West Bank and East Jerusalem

“It is easy for us who have never been victims of foreign conquest and are still living in our homes to vehemently denounce the violence of evicted Palestinians.” [1]

“Palestine is an occupied land stolen from its native people and time does not make it a property of the thief.” [2]

In 1939, Hitler ordered Poland to be depopulated and colonized by Germans. Poland had a substantial Jewish population. Less than 10 years later, in 1947 and 1948, Zionists—who, like Hitler, believed that Jews were a national collectivity, in addition to being a religious one, and that Jews ought to establish a homeland outside of Europe—ethnically cleansed Palestine, a former Ottoman territory, of a large part of its indigenous Palestinian population. The goal was to establish a Jewish state in Palestine to be colonized by Jewish settlers, mainly from Europe. The Zionists used terrorist…

Global Justice in the 21st Century

[Prefatory Note: An earlier version of this post was published with the title, “The Palestinian Struggle for Self-Determination: A New Phase?” in Middle East Eye, June 26, 2016. This version stresses the misappropriation of anti-Semitism as a propaganda weapon to smear pro-Palestinian activists, especially those supportive of the BDS Campaign. It also clarifies the issues of representation by explaining the formal differences between the PLO and PA, which do not seem presently consequential in my understanding; I am indebted to Uri Davis for bringing the distinction to my attention although he may not agree with my way of handling it.]

End of the Road?

There are many reasons to consider the Palestinian struggle for self-determination a lost cause. Israel exerts unchallenged paramilitary control over the Palestinian people, a political reality accentuated periodically by brutal attacks on Gaza causing massive civilian casualties and societal dislocation… 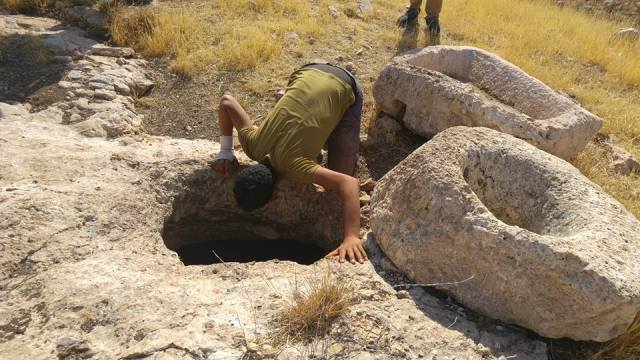 Four months away provide just enough distance to see the madness and the cruelty for what they are. Who has set up this crazy system and kept it running for half a century? Is it not mad to deliberately deprive human beings—families, children, the elderly– of water at the height of summer in a scorching desert? It was at least 37 or 38 degrees Centigrade, almost 100 degrees Fahrenheit, today in Al-Hadidiya. No running water, of course, and almost no water at all. You can’t survive there without water.

I should warn you that reading the following report may make you thirsty, like watching Lawrence of Arabia. I had two liters of water with me, and I wasn’t fasting, unlike most of the Palestinians I met (it’s Ramadan), but still I was thirsty all day. Once the sweet morning chill was soaked up…